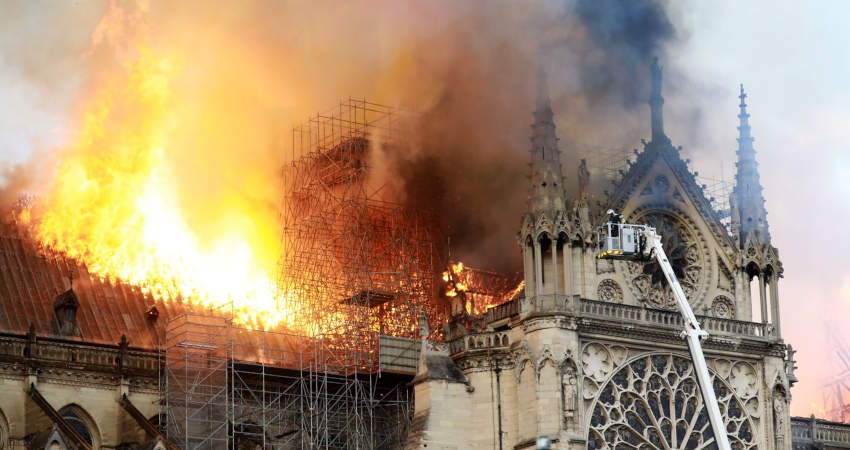 Notre Dame Cathedral, Paris – Most known as one of the Gothic Cathedrals of the Middle Ages

Thousands are left heartbroken after a massive fire outbreak on one of the top iconic cathedrals in Paris “Notre Dame Cathedral”. This magical spot has been undergoing renovations and it’s now an extensive damage again.

Videos showed part of the roof collapsing onto itself. Flames were under control but still not extinguished all damaged, French Junior Interior Minister “Laurent Nunez” said.

The major cause of this massive blaze is not yet recognized but all what requires is done by Paris fire department. Fire is now under control and no deaths reported.

Paris fire chief “Jean Claude Gallet” said that firefighters tried their best to save the cathedral’s landmark rectangular towers but there was still risk of interior structures collapsing.

Parisian authorities have ruled out arson and possible terror related allegations and it’s now treated as an accident as investigations are going on.

France’s president “Emmanuel Macron “addressed the nation on Monday night and vowed to rebuild the landmark. Other good hearted ones are still emerging towards the reconstruction including the French billionaire.

Chairman and CEO of Kering luxury group “François-Henri Pinault” has pledged $113 million towards the restoration of Notre Dame Cathedral according to reports by AFP news agency.

It’s really bad news for Paris and France as a country for their iconic religious spot, it even took President Donald Trump of United States of America, Barack Obama and Michelle Obama to twitter for expression of their sorrowful feeling as below.

Donald Trump – “So horrible to watch the massive fire at Notre Dame Cathedral in Paris. Perhaps flying water tankers could be used to put it out. Must act quickly!”

Michelle Obama – “The majesty of Notre Dame—the history, artistry, and spirituality—took our breath away, lifting us to a higher understanding of who we are and who we can be. Being here in Paris tonight, my heart aches with the people of France. Yet I know that Notre Dame will soon awe us again.”

Barack Obama – “Notre Dame is one of the world’s great treasures, and we’re thinking of the people of France in your time of grief. It’s in our nature to mourn when we see history lost – but it’s also in our nature to rebuild for tomorrow, as strong as we can.”

Why France Should Be A Stop On Your European Tour

Things To Do In France During Winter