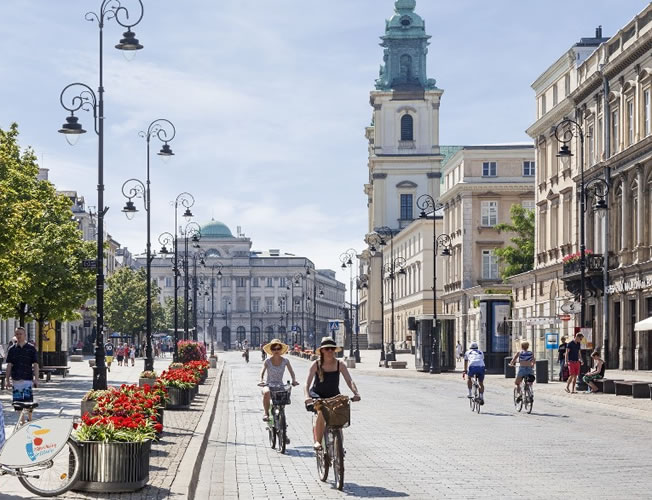 A City Guide To Warsaw, Poland – Top Facts About Warsaw, What To See, Do & Where To Go

The Polish city of Warsaw has much to offer the visitor in terms of historical and cultural experiences. With many physical and virtual monuments to the struggles of the Jewish Poles during World War II, Warsaw is a particularly interesting place to visit for anyone with an interest in modern history or those who wish to pay their respects to those who unjustly lost their lives to Hitler’s genocidal plans.

The Warsaw Jewish ghetto was the largest of all the Jewish ghettos in German-occupied Europe during World War II. In a mere 1.3 square miles, over 400,000 Jewish people lived in fear of their lives, and rightly so.

During two months in the summer of 1942, over half the population of the ghetto were taken to the extermination camp at Treblinka in eastern Poland. By the end of the war, over 300,000 Jews lost their lives in the area.

A small section of the ghetto wall remains behind a house in Sienna Street, Warsaw

There are two Ghetto Heroes monuments in the area erected at the sites where the German troops entered the ghetto in 1943. There is also a stone monument that was erected in 1988 on the site of the Umschlagplatz, or loading bay where Jews were forced onto transportation to the Treblinka extermination camp.

Whilst you’re in the city, take some time to wander through this area and visit these poignant memorials to vast loss of life suffered by the Polish Jews at the hands of the Nazi troops. The memorials are peaceful and provide quiet space for reflection and remembrance.

Stronghold of Dukes of Mazovia in 14th Century, the Royal Castle was the seat of power for the Polish monarchy until the early 20th century. Destroyed by the Nazis near the end of World War II, the castle’s edifice was rebuilt and now forms part of a UNESCO World Heritage Site along with the rest of the Old Town.

Today, the castle forms part of the Ministry of Culture and serves as a museum. With each of its rooms painstakingly restored to their former glory, you can marvel at the opulent throne room and assembly halls as well as taking in paintings by the Old Masters.

Rebuilt after much of it was razed to the ground during World War II, Warsaw’s Old Town is atmospheric and bustling. From the Royal Castle, take a walk across Castle Square and take in King Zygmunt’s Column, Market Square and The Barbican. There are some wonderful Warsaw holiday apartments in this area, which are ideally situated for your stay in the city.

Around Market Square, you will find many cafes and restaurants where you can sit and watch the world go by. Rebuilt in the Renaissance and Baroque styles that characterized the buildings before their destruction at the hands of German forces, the square somehow feels quaint and grand all at once.

Whilst you’re in the area, take the time to visit the Historical Museum of Warsaw. Located on Old Town Square, the Museum is open every day except Monday and has exhibitions to take you through Warsaw’s history from 1300 to the present day and a cinema showing the English language film, Warsaw Will Remember, detailing the destruction of the city during the Second World War.

There is much about Warsaw that is relatively new due to its decimation during the Second World War. However, the city retains much of its historical feel and is as convivial and welcoming today as it would have been in the days before war left its devastating mark on the city and its people.

A City Guide To Ipswich In England

Reasons Why Visit North Wales On Your Next Vacation