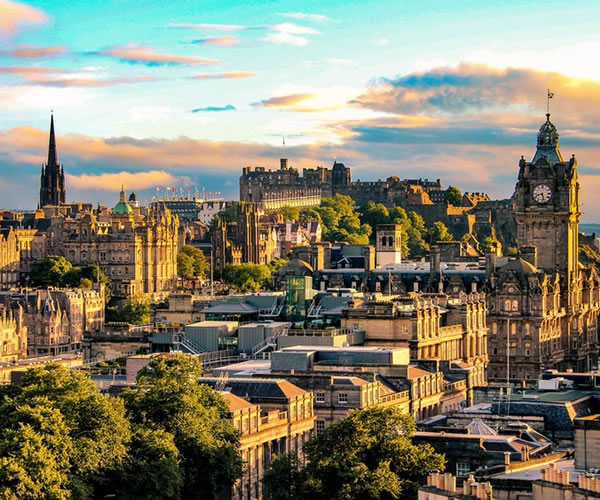 From its iconic Castle to natural wonders, the grand old city of Edinburgh is packed with sights, attractions and things to do. Flights to Edinburgh are cheap and plentiful so it’s easy to combine with a visit to other European cities.

Arguable the most famous sight in the Scottish capital, Edinburgh Castle is steeped in history with great halls, dungeons, a chapel, exhibitions, the Scottish National War Memorial and Museum, not to mention stunning views out across Edinburgh and the sea beyond.

It is from this castle that the One o’clock Gun is fired each and every day (since 1861). A tradition remaining from the days when it when it was used as a time signal for ships in the Firth of Forth and the port of Leith.

Stretching down from the Castle, the Royal Mile has so much history that you’ll hardly know where to look first. From St Giles Cathedral to the Whiskey Heritage Centre, the Camera Obscura to the Hub, Tollbooth Kirk and the Writers Museum, the City Chambers, John Knox House …the list is endless.

As well as all this, there are wonderful traditional pubs lining the street and many photo opportunities to be had. It may take you all day just to get from one end to the other!

At the foot of the Royal Mile, Holyrood Palace has played a central role in Scotland’s history ever since its foundation as an Augustine monastery by King David I of Scotland nearly 900 years ago. Today it is the Queen’s official residence in Edinburgh.

The New Scottish Parliament is across the road with the finished design having been chosen from a competition! The design is said to mirror and blend in with the stunning surroundings of Holyrood Park while the interior is modern and cutting edge in its intention.

Make sure you get a window seat as you fly into Edinburgh Airport because you’ll get a grandstand view of its landmarks, like Arthur’s Seat. This dormant volcano, looming behind the Scottish Parliament, rises 882 feet above sea level and has associations with King Arthur.

The ‘seat’ itself is said to be the indent between the highest point of the peak and a secondary point to the south. On a sunny day, nothing beats a day out here for a picnic, a long walk around the lakes, or up to the summit for breathtaking views of this stunning city.

Moving Out of the UK with Robinsons Removals

A Travel Guide To Crete, Things To See & Do