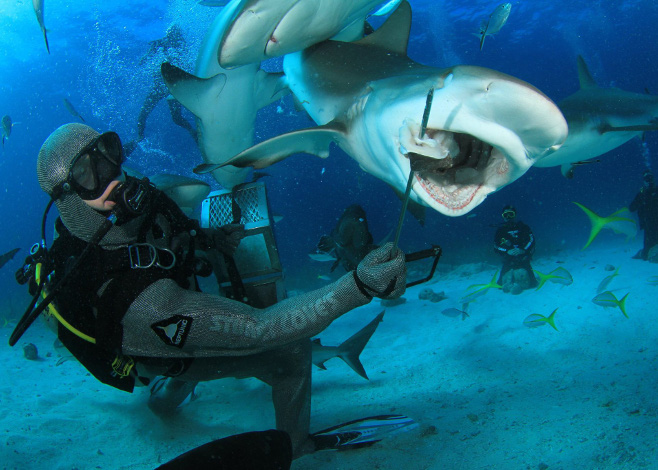 It could be jumping higher, falling faster or just taking a bigger risk – adventure sports fans are always striving to push the envelope in search of the ultimate thrill. Below is a list of some sports or destinations you may have yet to hear of:

As stunning as it is dangerous, this area attracts daredevils from across the globe and is responsible for the highest number of base jumping deaths anywhere in the world. The sport has claimed the lives of nearly 200 people since 1981.

Even free divers won’t deny that this is perhaps one of the most deadly extreme sports out there. Free divers take one large breath before descending hundreds of feet underwater, putting enormous physical strain on the body.

Here skiers hurtle from heights of up to 4,000 metres down high alpine slopes, traversing glaciers and ridges, while trying to avoid deadly avalanches.

Thousands of tourists descend on the San Fermin festival in northern Spain each year but few are brave (or stupid) enough to take their chances against the half-tonne fighting bulls. Dozens of people have been gored, while 15 people were killed in the last century alone.

While most people try to avoid the destructive power of these mini-natural disasters, there are plenty who are prepared to sign a personal injury waiver in order to see a tornado close up.

Big wave surfing may have been born in Hawaii, but a little-known spot off Tasmania’s south coast is where the sport is being pushed to new limits. Surfers the world over are drawn to the 30-foot waves and death-defying barrels.

Hanging off a 4,000 foot-high cliff face with nothing but your arms to prevent you falling to certain death is most people’s idea of hell. Yosemite’s Half Dome however is a Mecca for free-climbers, who make no use of conventional climbing equipment.

Those brave enough to have a go are sent flying down the Himalayan mountainside, 2,000 feet above dense rainforest, at speeds of up to 100mph.

New Zealand’s rugged landscape is the ideal playground for thrill-seekers. Adrenaline junkies here regularly take their lives in their hands when they attempt death-defying falls into the raging Wairoa River.

The dunes in Namibia’s Namib Desert can reach up to 1,000 feet high and with the sand moving constantly, there are plenty of steep peaks and unseen dangers.

While most extreme sports are relatively safe, some people have had the misfortune to suffer a holiday accident.

In the vast majority of cases, extreme sports operators adhere to strict rules to ensure the health and safety of their clients but occasionally negligence does occur, leaving many tourists with no option but to launch holiday accident claims.

A City Guide To Warsaw, Poland