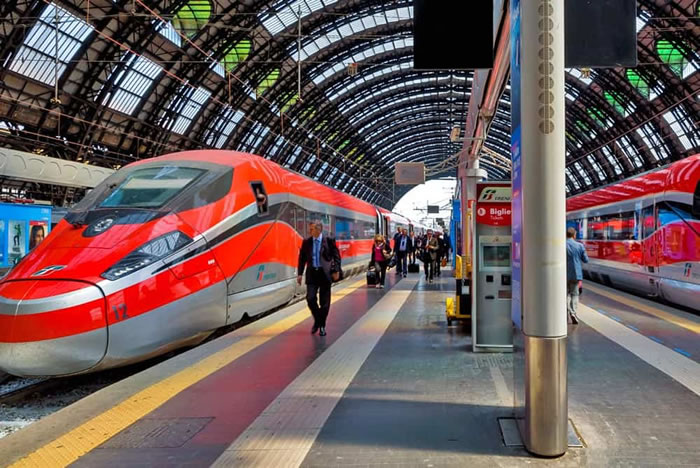 Trains are usually ranked to be a convenient mode of short, medium and long distance travel around Europe visiting its exciting places of interest.

Western and Central Europe has a dense and widely used railway network spanning around the entire continent.

For short distances, European trains are usually fast, reliable and frequent. For longer distances, it’s recommended to opt for flying means due to several reasons.

Trains are characterised with more spacious and comfortable interiors, many offer scenic routes, and do not require long waits at security like when it comes to airport clearing.

They usually run more frequently as well, and take their travelers to railway stations located in or very close to city centers.

While airports, especially those for budget flights, can be up to 100 km away from the city centre, requiring expensive and time consuming connecting services.

Ultimately, many people may prefer the train over plane for the feeling of romantic travel they provide and other characterised favorable conditions.

When bought on spot, train tickets can be more expensive than cheap flights over the same distance, but this difference may disappear when the tickets are booked in advance and this is more recommended to avoid frustrations and disappointments.

Train travel is getting faster every year due to the construction of new high speed lines which travel up to 300km/h, and upgrading of conventional lines to 200 km/h.

Especially Germany, France, Belgium and Italy have extensive high speed networks characterised and its advised not to miss out on them while on a visit to one of these amazing destinations.

Eastern European countries tend to offer very cheap travel tickets, Italy is comparatively cheap as well and the most expensive country in Europe is the United Kingdom.

How to Find Cheap Airfare to Europe

Different Ways Of Traveling In England

Explore The Exciting Italy By Train