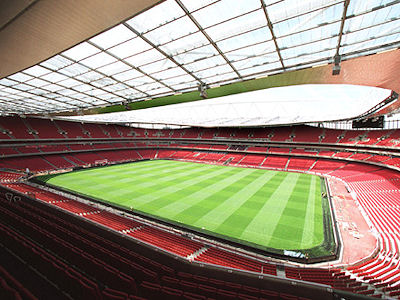 Emirates Stadium is a popularly known Football stadium for Arsenal Football club which plays in the English Premier League, its sitting capacity is 59,867 of people and it costed 390 million pounds for the construction.

This Stadium is geographically located in Holloway, London. its ranked to be the third largest in England after Wembley and Old Traford of Manchester United.

On Saturday, this Stadium is hosting one of the biggest matches in the English Premier leagues and this is Arsenal Vs Liverpool, huge fun base from different regions will be seen heading to Emirates stadium for the match.

There are several means of reaching this stadium from different regions within london, out of London and other continents, the best options of reaching include by plane, rail, bus, coaches,Car, and Bicycle.

The best recommendation for those coming from very far including from different European countries and other continents is the air transport means. The best nearest airports to Emirates stadium include London Heathrow airport, London Stansted Airport, Luton Airport, and London Gatwick Airport.

Those staying with in London you can get to Emirates Stadium by:

Bus. This is one of the most quickest and convinient means to use since there are several connections passing to all sides of the ground. Usually Main bus stops are located on Holloway Road, Nag’s Head, Seven Sisters Road, Blackstock Road and Highbury Corner.

Coach. This is another convinient option to reach the Stadium but usually the parking for coaches are available only during match days.

Car. This is another option to reach the stadiun but not recommended as in the Car owners are allowed to park outside the streets and after matches too much traffic is characterised and experienced.

Bicycle. This is the cheapest option of reaching Emirates Stadium for the match as there are several routes for bicycle users to the stadium. its very cheap, flexible, convenient and very possible.

After the above best options of reaching the stadium see you as we meet at the Emirates Stadium for the exciting Arsenal Vs Liverpool Match.